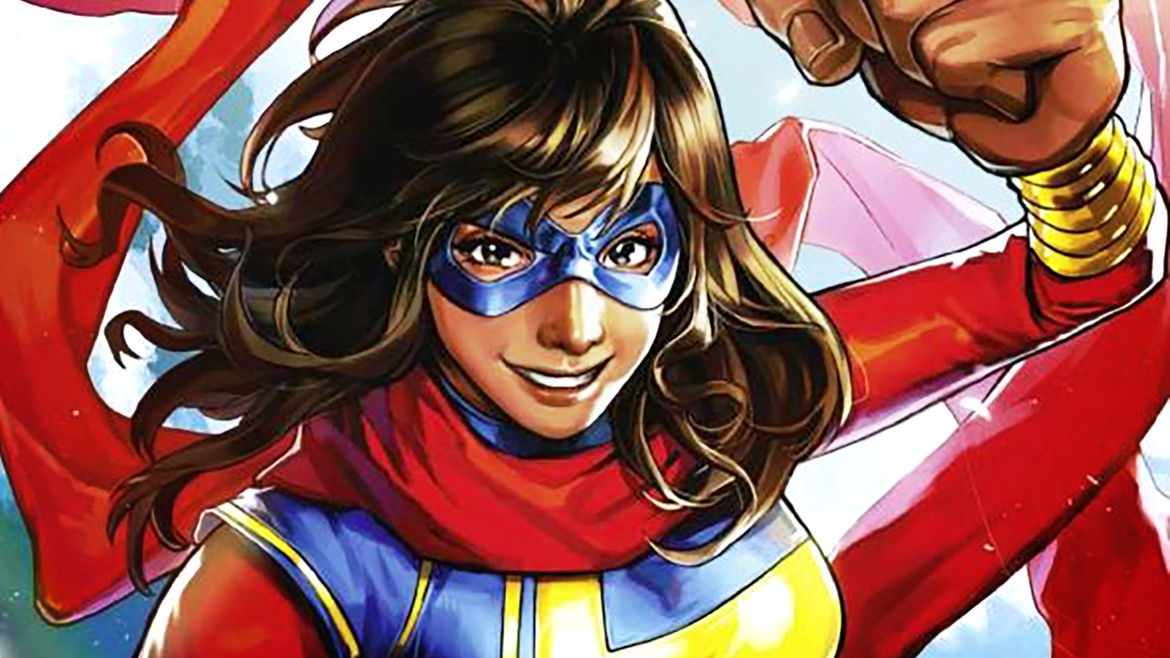 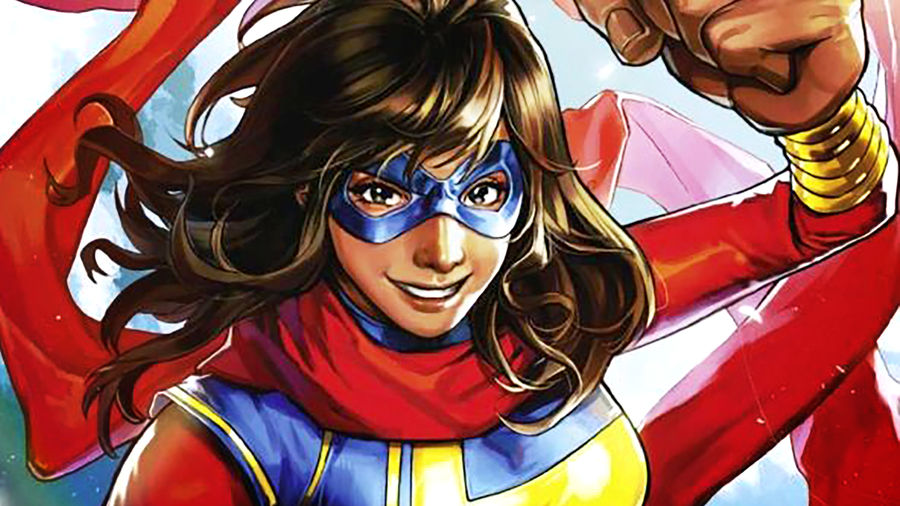 Why Do We Read Plague Stories?
Gabrielle Bellot

The Year of Breath
Gabrielle Bellot

Kamala Khan, Ms. Marvel, and Me

I’m still drawn to stories about teenage girls’ lives, real or fantastical, and a part of it is trying to glimpse a world I never fully got to walk in.

This isa column by Gabrielle Bellot about books and culture, the body, memory, and more.

As if these superheroine fantasies were not incriminating enough, I often imagined them while listening to the tortured, if not torturous, soundtrack of my teenage angst alone in my room. I was an only child who lived with her parents on the side of a mountain, at the edge of a quiet village of zinc-roofed shacks where the wind rolled by with the sound of Atlantic waves, and in this montane solitude I sometimes just lay down and imagined I was someone else, somewhere louder and more exciting: a girl saving the world, a girl fighting alongside characters from my video games and comics, a girl saving the other girl (or boy) she had a crush on.

Her words are disquietingly apt both for the moment—she has been facing an alien nanotech suit that looks, unsettlingly, like a negative image of her—and for her life more broadly, for Kamala Khan is also (to those in the know) the famed, shape-shifting savior of New Jersey, Ms. Marvel, whose foes are as often flesh-and-bone villains as her own inner fears. To win these battles, she has learnt, you not only have to stop the threat; you have to make sure you don’t become a threat to yourself, as well, have to make sure the maelstrom whipping around in you is calm enough to get through another day without pulling you under.

The series—which debuted in comic form in 2014 and will be adapted into a  series on Disney+ later this year—manages to make the well-trod story of a hero-in-hiding feel not only fresh, but politically and representationally urgent. Many superheroes struggle with who they are and how to balance their day-to-day life with their simultaneously secret-yet-more-public lives as defenders of the world, but even so, Kamala Khan feels special to me, on the one hand viscerally real in her awkward brown teenage-girldom, and a formidable fighter in her own right on the other.

Her persistence both gladdened and scared me. The sad truth is that so many brown female readers like me have become accustomed to both the venomous tirades and the toxic expectations that come with diverse representation in comic books, whereby nonwhite characters, women most of all, are torn down for the smallest perceived errors or narrative flops. These works are judged at extreme, anxiety-inducing standards. Make a mistake, and diverse representation itself gets blamed, even if the same “mistake” has marred any number of white male superheroes’ tales for decades. It's a stressful cycle—almost Wagnerian in its dramatic scope—of hope and fear for readers and writers alike.

When Kamala comes to, she’s become the original Ms. Marvel, sort of, sporting long blonde tresses and wearing Carol Danvers’s original outfit. Most notably, she has gained “polymorph powers,” which allow her to shift her proportions and appearance at will. Soon, she learns to retain her own appearance when she activates her abilities, as well as to elongate and “embiggen” her limbs at will, and, as she gets bigger, she becomes stronger. If Beowulf of the eponymous epic famously claims to have the strength of thirty men in each fist, Ms. Marvel can make a single fist far larger than the Danish hero in seconds.

She’s also inescapably awkward, and her abilities as Ms. Marvel curiously seem to amplify this—except, now, it has become an icon of power. In a moment, she becomes ganglier than any tall geek; in other moments, her body parts inflate or distend to proportions that can’t help but disrupt the aesthetic flow we expect in an otherwise mundane metropolitan background, and what is unabashed geekdom, if not a disrupting of a simplistic societal structure that privileges fitting in with sticking out?

She is the literal embodiment of defiance: defying the laws of physics; defying the societal codes that tell her to be a quiet, obedient girl; defying the one thing that would let her have something shaped like a normal life, which is to just stop being a hero, because she refuses to. And, as painful as losing one version of a life can be, there is something incredible, too, in refashioning it not as loss, but as something gained.

Giving up one life, sometimes, is the only way to really keep on living.

When I was actually a teenager, my father was diabetic, but he was still capable of walking and going with me and my mum on long trips. Now, as an adult, he can barely walk without a cane, his mobility ravaged by an abscess on his foot that nearly killed him and a clogged heart that tried just as hard. Once, years ago, a hurricane also nearly took his life; he and my mother only survived its cyclopean fury, its raging arms of wind, by hiding in a closet, and he had to be medevaced, later, to another island, then to the United States, for medical treatment. Over and over, he has looked into Death’s deep-sea eyes and, somehow, been able to look away and keep going. His face seems gaunter each time I see him, though his eyes still have some of their old twinkle; he tries to call me by my new name, but sometimes forgets and calls me another. I worry about him so often, especially during this pandemic, wondering how long he can look away from those fatal eyes.

Hyde is overwhelmingly strong, and Ms. Marvel only manages to defeat him through the help of her new, enhanced Kree nanotech suit—a suit that, she suddenly realizes, has been programmed to help its wearer not simply stop but kill its opponents. She tries to break free of the suit, then finds herself facing, with cruel aptness, a dark shadow of herself, because it is her very identity she has been fighting all along, the girl who wishes to protect Jersey from danger but whose job is such that she cannot even be at her father’s side in what may be his final moments.

Still, armed with newfound optimism, Kamala is able to smile with her father again, even if she knows there will come a time when he will not be able to smile back. Amidst all the alien tech and frenzied mutants, here is a moment startlingly tender and real.

Gabrielle Bellot is a staff writer for Literary Hub and the Head Instructor at Catapult. Her work has appeared in the New Yorker, the New York Times, The Atlantic, The Cut, Gay Magazine, Tin House, Guernica, The Paris Review Daily, them, and many other places. Her essays have been anthologized in Indelible in the Hippocampus (2019), Can We All Be Feminists? (2018), and elsewhere. She holds both an MFA and PhD in Creative Writing from Florida State University. She lives in Queens.

Rewatching ‘Freaks and Geeks’ in a Polarized America

For all the pain, there is also beauty in the margins those outside of them may never understand.

The Year of Breath

I try to feel my lungs expanding and contracting, just to make sure they still are. There is something soothing, like the indigo of a fading day, in that reminder.

Living in Dread of the Next Name We’ll Chant

There is hope in the size and power of our protests, hope that our message will truly, finally be heard—but whether it will be understood in the hearts that need it most is a much harder, scarier question.

Genetic Testing Can Tell You a Lot About Yourself—But What If You Don’t Want to Know?

I wanted the most information possible and thought I had nothing to fear. Then my mother began to lose her memory.

The Wildness of Maurice Sendak

Just as Sendak inverts a stereotypical association of white with youthful ingenuousness, Max inverts the expectations of many a children’s morality tale, for he is allowed to be wild.

The Curious Language of Grief

I don’t think I cried over his death for a long time. I wondered if something was wrong with me. I hadn’t realized that we have to learn how to cry.